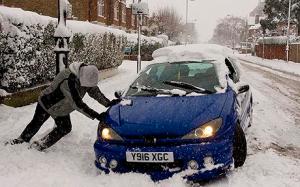 Before you say it, I know.

I could fabricate some kind of glamourous and exciting explanation as to why I have not blogged since forever but I have simply had too much shit going down and I had to deal with each situation in order they came at me and something had to give. That something was my blog. Some of the things I have had to deal with are learning to become a teacher (yes, me), moving house, some heavy personal stuff that I am not willing to share on the public internet stocks and some broken bones. The second half of 2012 was like the audience of Glastonbury. Intense.

But enough of my whining. From what I can glean from the UK media the motherland has had a couple of inches of snow so the whole country has come to a complete standstill and people have started eating their pets and are eyeing up their plumb offspring with hungry, culinary appraisal. We are talking a national crisis here. We are talking provisions, burning your furniture and panic buying of cheap, brittle plastic toboggans.

The other aspect of living in a post-apocalyptic Britain covering in a couple of inches of snow is that you are at sometime going to have to drive somewhere just so you can buy a can of baked beans because you saw your Ocado delivery truck skewered off the side of the road on regional news and feral locals looting your Organic Houmous and Line Caught Tuna Steaks. So, you’re going to have to get into your Ford Focus and, like Scott of the Antarctic, brave the bitter outside world and get to a Tesco Metro (the shame).

After living in Switzerland for three years (oh, how time has flown) I can now – with some confidence – impart some small amount of advice on what I have learnt about driving in the snow. We obviously have a number of advantages over UK citizens in that the Swiss councils plough and grit both the roads and the pavements almost immediately and everyone in Switzerland fits their cars with winter tyres. Most people also travel with some snow chains, a spade and a big bag of salt just in case it all goes Pete Tong. But even without these advantages I can still give some advice. Most of it is common sense, but you might still find some things useful.

Before you set off – Planning is everything

Driving – Some hints and tips

Emergency Measures – If you are stuck somewhere is very deep snow and absolutely have to drive somewhere.